What is in a bat report? 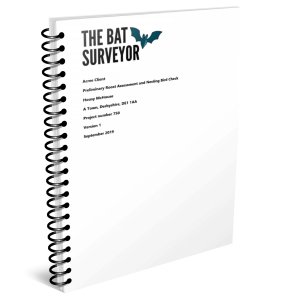 What is in a bat report?

Why do I need a bat report?

You’ve submitted a planning application and the local authority have asked you to supply a bat report.  Here’s why.

All species of bat in Britain are legally protected – individual bats are protected from harm and disturbance and their roosts are protected from damage or destruction.  Local authorities also have a legal duty to pay ‘due regard’ to bats when performing their duties – which includes giving planning permission.  In addition, some species of bat are ‘Biodiversity Action Plan’ (BAP) species (well, BAP species have been superseded by Section 41 species, but BAP still sounds better!), which means that they are a material consideration in planning.

The LPA will therefore request a bat report to support any planning application that could effect bats and their roosts.  This will include most projects that involve modifying, converting or demolishing a building or mature trees.

The report will set out whether the site is suitable for bats, whether any additional surveys are needed and what should be done if bats are confirmed.

I’m only really discussing reports for an initial survey here, as that is what we cover at The Bat Surveyor – Preliminary Roost Assessments (or sometimes called Bat Scoping Surveys, and Initial Bat Report or simply a Bat Report.)

What should be in the bat report?

The bat report should be written in accordance with best practice.  This includes:

What does the ‘potential suitability’ of the site mean?

You could think of the suitability as the ‘risk’ of bats occurring, but that isn’t quite right as the assessment isn’t supposed to consider the local environment, just the structure itself.  You could therefore have an old building with lots of nooks and crevices that bats like to squeeze into in the middle of a concrete car-park and technically it will be assessed as ‘high’.  In our reports if there is a disparity between the suitability of a structure and the chance of their actually being bats in it, we make this clear and modify our recommendations rather than slavishly following the guidance.

The full definitions are given in the table below, but the following is a summary.  I use ‘structure‘ to mean whatever is being surveyed such as a tree, house or bridge. ‘Feature‘ means a specific part of the structure that a bat could use to roost, like a loose roof tile, or a rot hole in a tree.

Negligible – No features that bats could roost in. There is no need to consider bats further.

Low – There are some features on the structure that bats could roost in, but if they do they are only likely to do so opportunistically, like if they are caught out in bad weather.

Moderate – There features on the structure that could be used by a small number of bats occasionally.

High – There are a number of features in the structure, or the features could support an ‘important’ roost. An important roost could be a maternity colony (where pregnant females gather, give birth and nurse their young) or a hibernation site (where bats go into torpor over winter).

A good surveyor will assess the structure and its features, then try to eliminate as many of the features as they can by demonstrating that bats don’t use them (e.g. by checking them with an endoscope).  Any features that can’t be ruled out are used to determine the potential suitability of the structure for roosting bats. As I said above, this should also be put in context with the site and its surroundings to consider how likely a bat roost is. This means that recommendations for additional surveys should only be made after a thorough daytime survey and consideration of the site.  I’m not saying that additional work is never needed, but that a considered approach should be taken.

You should expect the report to be written in accessible English, not just jargon, and for the conclusions to be justified.  If an ecologist is telling you you need to spend more money with them doing more surveys, the bat report really should give you a clear understanding why.

If the structures were assessed as low, moderate or high, The report could recommend additional surveys to demonstrate whether bats actually roost at the site or not.  These are usually dusk surveys or pre-dawn surveys.  As it sounds, this involves ecologists coming to the site at night.  They will have bat detectors (which transpose and record bat echolocation calls) and may have night-vision equipment.

Typically for a low potential structure, this would be one dusk or one pre-dawn survey.  The survey can be completed at any time between May and September inclusive.

The bat report should also consider what the impacts to bats would be if they are there and set out appropriate mitigation, compensation and enhancement

Mitigation – what can be done to deliver the project, but reduce impacts to bats.  This might include slight redesigns, but also methods of working to avoid harming bats.

Compensation – if all the impacts can’t be avoided, what can be done to compensate for impacts.  This might be creating new roosts to replace those that are lose.

Enhancement – what can be done to make the site better for bats after the project than it was before.  Perhaps additional roosts would be useful, or better planting and lighting around the site.

What else should your bat report include?

You should expect the report to include detailed results of the survey, photos that illustrate the results or assessment and plans.  A summary of the legislation that is relevant to the project should be included as well.  We’d keep all this additional information in appendices so that the main report isn’t cluttered or too thick to wade through.

How long do bat surveys and reports remain valid?

The Bat Surveyor Can bat surveys be undertaken in Autumn? Scroll to top

This site uses cookies. By continuing to browse the site, you are agreeing to our use of cookies.

We may request cookies to be set on your device. We use cookies to let us know when you visit our websites, how you interact with us, to enrich your user experience, and to customize your relationship with our website.

Click on the different category headings to find out more. You can also change some of your preferences. Note that blocking some types of cookies may impact your experience on our websites and the services we are able to offer.

These cookies are strictly necessary to provide you with services available through our website and to use some of its features.

Because these cookies are strictly necessary to deliver the website, refuseing them will have impact how our site functions. You always can block or delete cookies by changing your browser settings and force blocking all cookies on this website. But this will always prompt you to accept/refuse cookies when revisiting our site.

We fully respect if you want to refuse cookies but to avoid asking you again and again kindly allow us to store a cookie for that. You are free to opt out any time or opt in for other cookies to get a better experience. If you refuse cookies we will remove all set cookies in our domain.

We provide you with a list of stored cookies on your computer in our domain so you can check what we stored. Due to security reasons we are not able to show or modify cookies from other domains. You can check these in your browser security settings.

These cookies collect information that is used either in aggregate form to help us understand how our website is being used or how effective our marketing campaigns are, or to help us customize our website and application for you in order to enhance your experience.

If you do not want that we track your visit to our site you can disable tracking in your browser here:

We also use different external services like Google Webfonts, Google Maps, and external Video providers. Since these providers may collect personal data like your IP address we allow you to block them here. Please be aware that this might heavily reduce the functionality and appearance of our site. Changes will take effect once you reload the page.

The following cookies are also needed - You can choose if you want to allow them: